U14 Boys Triumph during Easter Classic 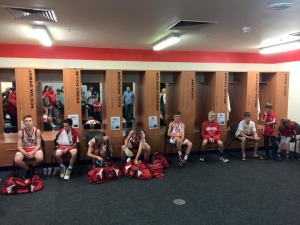 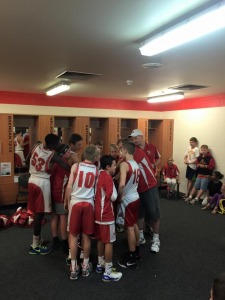 Over the Easter weekend, the Under 14 Div 1 Boys competed in the Easter Carnival against a range of teams from Adelaide and Melbourne.

Our first game was against South Adelaide and we had a great win by 17 points and the next team was against McKinnon who were a strong Melbourne side who managed to take us by 2 points in the last minutes. This was a huge game and we lost a player to injury for the rest of the weekend and were now down to 7 players.

The next game was against Nunawading who we beat 50 to 41, this was another close game. The last game of the minor round was against Blackburn which we had an easy win taking the game 79 to 32 and this sent us straight into the semi finals against our rivals Centrals who have taken us on our last two encounters. During this game the boys stepped it up and took the win 61 to 36 and led us to the finals and another match up against McKinnon.

The grand final was very close and we ended up with the win by 1 point in the last 20 seconds. The video is floating around on facebook of these last seconds and is great to watch. We had a mixed team of Div 1 and 2 players and every player scored in every game with amazing team work being displayed amongst the boys.

We would like to thank all the parents for bring the boys to the games and supporting us as well as thanking Coach John Della Pia and Assistant Coach Josh Bond for great coaching and reading the games so well that the boys could beat the plays and traps used by the Melbourne teams. Big thank you to the boys who played injured and sore during the weekend and continued to playing strong and hard throughout every game. It was a great weekend to prepare us for State Championship and future games. Go Rockets