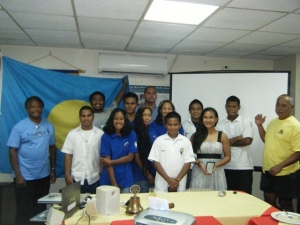 In commemorating the official date of the 10th year anniversary of the Palau National Olympic Committee on June 19th – the Palau NOC board celebrated the day with the NOC staff by introducing the indentified potential young athletes for the 2009-2012 Olympic Program.  The young athletes indentified to have the potential to qualify to the Youth Olympic Games in  2010 and continue on to the 2012 Olympic programs are:  Athletes from Swimming:  Maria Gibbons, Anja Flowers, Esebei Doran, and Osisang Chilton.  In the Track and Field Program: Leon Mengloi, Bella Reklai and Ruby Joy Gabriel.  Wrestling Program:  Blesam Tarkong and Radley Umang.  Canoe Program (ICF)  Youri Ito and  Weightlifting Program Stevick Patris.    The Palau National Olympic Committee with National Federations that have identified young athletes in the next four years, have applied for support from the International Olympic Committee (IOC)  to provide opportunities for this young athletes to either qualify or receive a wildcard in representing Palau in international sporting competitions throughout the world.  Many of these young athletes are travelling abroad during the month of  July to ensure that they participate in the international and regional competitions of their sporting events to have a place in future competitions.  The Palau National Olympic Committee President, Mr. Frank Kyota, introduced the 10year anniversary and the plan for the NOC to make the commitment for this young athletes and other athletes in Palau not only in their preparation, practices and their endeovours to be successful in as athletes, but to be successful Palauans in everything that do today and in the near future.  Mr. Kyota sought the parents support of the  athletes preparation and participation in sport as well as outside of their sport programs.  The Palau NOC celebrated the 10th anniversary by providing each identified athlete the Key to the Olympic Door representing the support that each athlete has from the sports (NF) programs, the NOC’s ,  their families, our government strong support and our overall community.    In celebrating the 10th year anniversary the Palau National Olympic Committee extends much appreciation to everyone in our community, the State and National Government, all the sponsors, athletes, coaches, officials, families and partners of sports – for all the commitment, partnership and support that you have contributed and made a difference in our community through sport…Thank you very much!