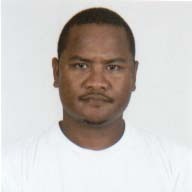 Kazuki "Topps" Sungino, named Team Palau Chef de Mission to the 1st Youth Olympic Games in Singapore, 2010.  In anticipation and preparation of Team Palau to the First Youth Olympic Games, to be held in Singapore from 14 - 26 August 2010, Kazuki (otherwise known as Topps) will head Palau's delegation.  Topps is no stranger to team management; he has served on numerous teams as a player, coach, and administrator to various regional and international events.  His most recent stint was at the 29th Olympic Games in Beijing where he served as the Chef de Mission Attache for Team Palau.

Topps has been involved in sports since childhood, particularly in basketball.  Although he has been known to dabble in other team sports such as baseball and volleyball, he prefers the basketball court above all else.  He has represented Palau in several regional events as a player and since 2001 became the National Basketball Development Officer.  For the past seven years, Topps has organized countless events for the development of basketball in Palau and has also promoted it as a alcohol and tobacco free sport.  This will be his first time to lead a contingent to participate in an event of this caliber and the Palau NOC has every faith and confidence in his ability.