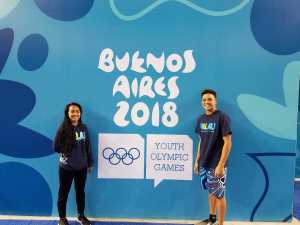 Team Palau had a very successful Youth Olympic Games these past couple weeks in Buenos Aires, Argentina. Swimmers Noel Keane and Roylin Akiwo represented Palau at the Youth Olympic games, as the lone sport who attended the games. The Youth Olympic Games, which are conducted every four years, started off with a very artistic and creative Opening Ceremonies, in which Roylin was the flag bearer for the Republic.

Noel did well in his two events, with a 2:00.77 in his 200 Freestyle, which was over two seconds faster than his personal best, and a 55.59 in his 100 Freestyle, which is three-tenths faster than his personal best. Both of those swims bettered the Palau National Records in those events. Roylin had a good meet, where she got a 34.84 in her 50 Backstroke, which was just a mere three-one hundredths (0.03) off her best time. Her 50 Freestyle was a bit off her best with a 31.27, but still one of her best swims in over a year. Roylin, who just recently started swimming in college at Lincoln College in Lincoln, Illinois. With a lot of hard training going on, it was a tough swim, but nonetheless we were very proud of how well she raced and executed her races.

Overall, the two had a great experience by meeting many new swimmers, officials, and athletes across many sports. The athletes were able to check out several booths and participate in many activities that taught them several great things such as “Play Fair” and the “Performance Accelerator”, as well as several different games and fun stuff that were throughout the village for the athletes. The two traded pins with several athletes from around the world, and got to see and appreciate sports the we have never seen played before.

Next up for Team Palau Swim Team, will be the FINA Short Course World Championships in Hangzhou, China on December 11-16, where Noel and Roylin will join Osisang Chilton and Dirngulbai Misech on the world stage of swimming.