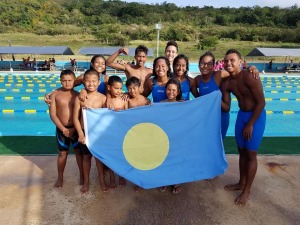 Everyone swam out of their minds, as Team Palau did exceptionally well at the 2018 Saipan International Swim Meet, at Marpi, Saipan, on March 23-25. Palau Swimming Associations, “Lionfish” team had some amazing times, dropping again in every single event they swam. Some of the highlights were Jamika Oiterong and Elengoi Gibbons dropping 56 and 50 seconds each in the 200 IM as well as Jion Hosei hammering out one of the best 200 Freestyles a ten-year-old can do with a blazing 3:10. Charlie Gibbons, Jace Borja, and Kazuumi Nestor all did incredible as they dropped big time in all of their races, especially the 50 and 200 Freestyle events.

As for the older kids, the National Team really started to race well as Osisang Chilton, Jericho Maido, and Shae Gaymann all broke National Records at the meet. The first one was Osisang breaking UB Misech’s record in the 400 IM (6:15.42) with a strong 6:09.08. Not only that, she then turned around and broke her own 400 Free record (5:10.54) with a very well split race finishing with a 5:09.62.

In the Open Water event, Team Palau did well, earning four gold medals, as Charlie won the 600m swim, Coach Billy won the 2.6K, Jericho won the 4K, and Osisang won the 5K. Also, Shae had a big swim getting silver in the 5K, not far behind Saipan's Kento Akimaru. Kazuumi also got third in the 600m, while in the 1K, Elengoi got seventh for the girls, and Jion got third and Jace got fourth in the boys’ side. In the 1300, Jamika tied for fifth, while Klei Andreas just narrowly got third. In the 4K, Lolmei Uong got third on the girls’ side, while in the 5K, Ikelau Misech got fourth.

To highlight the meet a bit more, the awards banquet was right after, where they gave out the "High Point" Awards, which is given to the kids who score the most point in their respective age groups. In the 8 and Under boys division, Kazuumi won first place overall, and Charlie got second. Jericho won the overall High Point for the 13-14 boys, and Shae got second in the 15-16 boys. To cap it off, Osisang won the overall for the 17 and Older ladies division.

In total, Team Palau achieved over 90% best times, Twelve National Records, Four Gold Medals in the Open Water race, and three "High Point" winners in their respective divisions for the swim meet. Next up for the team will be Guam Championships in May, Oceania Championships in June, and Micronesian Games in July.