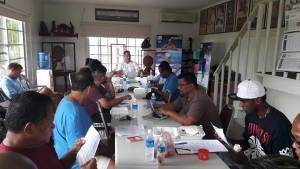 On January 26th 2018, Team Palau Micronesian Games Organizing Committee held their first meeting. The meeting took place at the Palau National Olympic committee conference room as per Presidential Directive No. 18-31 to create the Team Palau Organizing Committee for the 9th Micronesian Games 2018. This meeting was to identify team coaches, preparing budget and practice schedule as we start preparing towards the 9th Micronesian Games 2018 in Colonia, Yap. Next meeting will be held on February 8th, 2018 and Palau NOC conference room. For more information about the games please call us at +680 488 4367/6562 or email us at pnoc@palaunet.com or visit the Micronesian Games website at https://microgames2018.com .

History of the Games

The “Sixties” had been a decade of great change in Micronesia – so much so that members of the 2nd and 3rd Congress of Micronesia worried about the ability of their people, especially the youth, to cope. As an outgrowth of this concern, the Micronesian Games were conceived as a way to help the developing Micronesian island nations build character and as a mechanism for unifying the islands. A statement in the program booklet for the 1969 Games says it all: “The desire to excel may only be fulfilled through the opportunity to excel.”

The first Micronesian Games, organized under the Chairmanship of Felix Rabauliman, assisted by Elias Okamura and Al Snyder, and held in Saipan from July 412, 1969, brought together athletes representing only those Micronesian islands which constituted the U.S. administrated Trust Territory of the Pacific Islands, including the Marianas, but not Guam, Palau, the Marshall Islands, Yap, Truk (now Chuuk), Ponape (now Pohnpei), and Kusaie (now Kosrae) but then part of the Ponape District. That first-ever Micronesian Games consisted mostly of men’s tournament, including baseball, basketball, canoe racing, tennis, and table tennis. In addition, a special sport was created to represent the traditional, historical and cultural ties which bind all the islands of the western Pacific – “Micronesian All Around Competition.” In this tournament, islanders matched skills in such events as coconut tree climbing, coconut husking, spear throwing, swimming and diving. Other sports (in which women were also allowed to compete) included volleyball, swimming and track and field.

Twenty-one years later, the Second Games were an outgrowth of Mobil Oil’s commitment to community development in Micronesia through its support of a regional baseball tournament. The first Mobil Games tournament was held in 1988 in Saipan, bringing together baseball team from Palau, two teams from Guam and a team from the Northern Marianas. Interest in the tournament was considerably peaked by comparisons which were made using stats from the 1969 Micronesian Games. The huge success of the Mobil Games prompted four key individuals to form an organizing committee the following year with the purpose of reviving the Micronesian Games. These four gentlemen, Ed Manibusan, Bill Sakovich, Frank Rosario, and Bob Coldeen, then approached the Governor of the Northern Marianas and received a green light to put together the plan. With key financial support from Mobil Oil, Duty Free Shoppers, Ltd., and Shimizu Corporation, the Second Games were realized for 1990.

What was most remarkable about the 1990 Micronesian Games was the discovery that the unity and friendships forged in the First Games had survived intact. True to the spirit of the 1969 Games, athletes gathered once again in Saipan, and proved the value which sports competition has in fostering cultural exchange and the sharing of common values. In 1990, with the inclusion of Team Guam, more than 900 athletes, coaches and officials came together to build upon past records by competing in the same sports which had been held in 1969, with one minor change. Originally the canoe competition had History included both canoe sailing and canoe paddling. Lack of participation in 1969 for the sailing event led to its being dropped for the 1990 Games.

By leaps and bounds, the Games have grown, as in 1994 when Guam hosted the event which was expanded to include the Republic of Nauru and over 1500 athletes participated. To the list of sports included in the 1969 and 1990 Games were added women’s basketball, softball (fast pitch for men and slow pitch for women), and men’s weightlifting. Women were also allowed to compete in canoe racing, tennis, and table tennis. The Micronesian All Around was modified for the women’s competition by substituting coconut grating for coconut husking. Demonstration sports included beach volleyball, golf, bodybuilding, powerlifting, women’s weightlifting, taekwondo, and water polo.

In addition, an exhibition game of soccer was participated with teams from Guam, Palau and Yap. The Games have truly been a key factor in unifying the islands of the central to western Pacific region. They have developed as a steppingstone for entry into the South Pacific Games, Oceania Sports, and the world Olympics.

“Let the Games Live On”