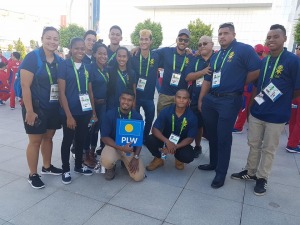 Ashgabat – The team has finally settled into the Games village after a whole Delegation Registration Meeting (DRM), inventory and inspection of all rooms allocated to team. Florian Temengil and Cristian Nicolescu (Wrestlers) arrived 3:00 a.m. on 14th September and organizing committee validated their accreditation and provided them a room to rest before the whole delegation arrived.

Team Palau will have their flag raising ceremony at the Games village on 15th September 2017 at 10:00 a.m. Chef de Mission (CDM) meeting is scheduled on 16th September 2017 at 7:00 a.m. at the Cinema Room. Our team will be competing in Ashgabat on 17th – 27th September 2017 and will make their return home. Best of luck to our team and a safe journey return.
September 15th 2017
Palau's flag was raised at the 5th Asian Indoor Games Flag Plaza in Ashgabat, Turkmenistan on Friday the 15th September 2017 at 10:00am, officially marking the Republic's arrival at the venue.
The delegation was led by Palau NOC President Kyota along with Team Palau Chef De Mission John Tarkong, Jr. Palau NOC Presidnet Kyota presented a token of appreciation to village chief Azad Muradov and also the National Olympic Committee of Turkmenistan Secretary General. Both Palau NOC President and Chef de Mission Tarkong was joined by athletes and officials from Athletics, Swimming, and Wrestling.