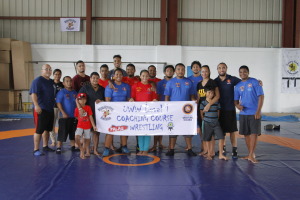 Over the past week, United World Wrestling - Oceania Regional Development Officer Ilai Manu conducted the UWW Level 1 Coaching Course in wrestling. The course was held at the Palau National Gym from June 7-11, 2017. There were about 10 participants from Palau that took part in the course who were certified.

The Level 1 course was a very intensive 40 hour course and it included those with practically no experience to current and former athletes, national coaches and those from the community who were motivated and ready to improve their understanding and skills. The course is considered as an entry point into the UWW Coaching Ladder for virtually every coach and is designed to provide a broad introduction to coaching and a solid foundation upon which to build and progress to the higher level courses. In preparation for the Belau Games this month, the course was organized especially to help state coaches and teams to prepare for such competition. Among the participants who were able to complete the course and received their certification were Sylvester Ngiraked, David Salapwa, Blesam Tarkong, Skarlee Renguul, Christopher Kitalong, Samantha Rechelluul, Stahler Swenny, Uilau Ilebrang Tarkong and John Tarkong Jr. It was a lot of fun as the participants worked hard over the course of the week to earn their way in becoming a coach.

The course was organized by Belau Wrestling Federation (BWF) in conjunction with United World Wrestling (UWW). Funding for the course was made possible and in partnership with UWW and the International Olympic Committee (IOC) through the Palau National Olympic Committee (PNOC). BWF would also like to thank our sponsors who also provided funding this course and for our wrestling camp held over the weekend. Some of the funds will also be used to assist one (1) of our young and promising athlete Stahler Swenny from Emmaus High School and 1 coach who will be taking part in the “More than Medals Camp” in July in Thailand. Upcoming tournaments for the remainder of the year include our elite athletes competing in the World Championships and the 5th Asian Indoor and Martial Arts Games being held in Ashgabat, Turkmenistan in September. BWF would like to give special thanks to our sponsors WCTC, Palau Pacific Resort, the Etpison Foundation, the Office of the President and HANPA. Most of all, thanks to all the athletes, coaches and family.