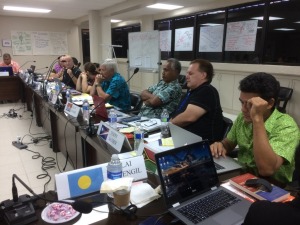 The second workshop for National Olympic Committee Secretary Generals from 15 Pacific Island countries in Oceania is well underway in Guam. The first was held in 2011.

Apart from Australia and New Zealand, the only other missing NOC is Nauru.

Blas says the objective is to get all NOCs on the same page moving forward into the new quadrennial.

Important for NOC’s to be here says ONOC SG

Oceania National Olympic Committee (ONOC) Secretary General Ricardo Blas is disappointed that Nauru not is not at the 2nd NOC Secretaries General workshop in Guam.

“Very important for them to be,” said Blas.

Blas says the workshop is important for NOCs to know the direction in the next four years (quadrennial).

He says Guam and Cook Islands would be celebrating over 30 years of being in existence and its important to know the way forward.

“We need to move beyond just development. Look at Fiji (referring to the Olympic gold medal win 2016).

“Recent actions of WADA saw Samoa getting a silver medal. Tonga in 96.”

Blas says the focus is on governance and how NOCs need to line-up with the requirements of the Olympic Charter and their Constitutions.

He said two NOCs have been sending athletes to the Olympics in the last 10 years but have had no elections.

“Otherwise they won’t get any support from Olympic Solidarity.”