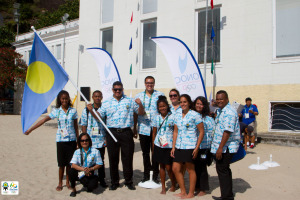 15 nations of Oceania came together as one family, Oceania National Olympic Committees.
This film features America Samoa, Cook Islands, Fiji, Federated States of Micronesia, Guam, Kiribati, Marshall Islands, Nauru, Palau, Papua New Guinea, Samoa, Solomon Islands, Tonga, Tuvalu & Vanuatu.
On the beach of Rio de Janeiro we see dancing from Team Kiribati's David Katoatau, prayer and flag flying!
The Reporters’ Academy have been commissioned by a number of Oceania Olympic teams to provide press and media production support throughout the Games.
We will be writing, filming, reporting and collating all their news to share on these teams’ media platforms and also to allow our friends in the international media to tell their stories.
This film was made by young people of The Reporters’ Academy, a media production company run by young people. Tasked with the mission of reporting behind the scenes of the Rio 2016 Olympics.
Source: Reporter's Academy