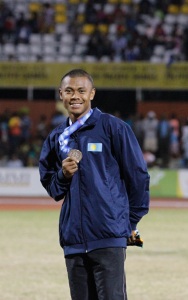 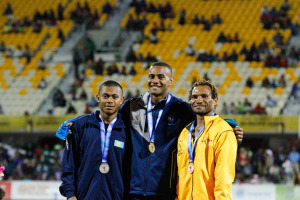 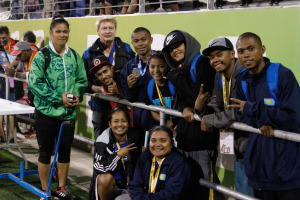 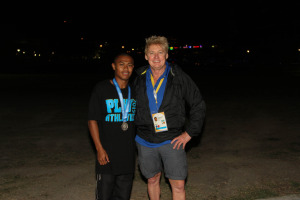 Second Day on Athletics 100 Meter Semi- Finals and Finals Results
Shaquille Teltull completed his 100m Semi Final with time of 11.67 seconds,unfortunately didn't qualify for finals. His older brother Rodman Teltull  was on the second hit of the semi-finals and was able to made it to the finals with the time of 11:17 seconds which placed him 4th on the 100 meter finals start list. On their final race for the night Mr. Teltull came out with confidence and beat Kupun Wisil from PNG but fall short to Ratu Banuve Tabakaucoro from Fiji to win a silver medal, a second medal to Team Palau 2015 at the Pacific Games in Port Moresby. Mr. Rodman Teltull home is the in Brisbane Australia where he has been training at the high performance institute under the guidance of Mr. Anthony Fairweather and a proud recipient of the Olympic Scholarships for Athletes “Rio de Janeiro2016” for the Republic of Palau.
Congratulations to Palau Athletics Team. Coach Peoria "Poich" Koshiba, Toluk Sakuma, Charlie Ellis, and our new coach from Australia Mr. Anthony Fairweather.