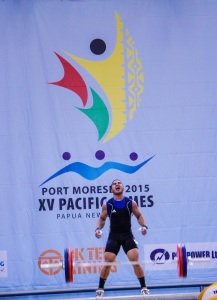 With 2015 Pacific Games as the best game ever seen by Pacific Islanders, Stevick Patris of Palau persevered to his utmost best in the snatch, clean and jerk with 16 competitors in the same weight class of 69kg, including in the games Australians and New Zealand.    With the tough competition and doing his utmost best for this games, Stevick came out of the snatch event only few points away from Samoa to capture the bronze in the snatch, and achieving 4th place in the clean and jerk category and placing 5th overall in the 69kg Men Weightlifting event.    The weightlifting competition or the Pacific Games added the Oceania Junior and Senior competition adding points for the athletes of the games.  Earning the first medal (bronze) for Team Palau, Stevick was happy but not satisfied with his performance outcome, and mentioned “I need to learn to be more relaxed and not be pressured because of expectations of other people than myself”.  However, when Team Palau interviewed Stevicks mentor and coach, Mr. Paul Coffa and his wife Lily Coffa of the Oceania Weightlifting Institute Training Center, both agreed, that Stevick is a champion weightlifter and training hard to achieve his best and will continue to do so.  Stevick is training at the center in Noumea with all his weightlifting mates who all competed at the Pacific Games, and are all setting blaze in the top weightlifting program for Oceania, such as champion Dika Dua of PNG, Manuel Minginfel, and off course Stevick from Palau.

A good first session of Pacific Games this morning. Shawn dropped four seconds in his 200 Free just missing the National Record by less than a second. Roylin was on fire as she dropped 6+ seconds in her 100 Free (going out in her best 50 ever), then turning around and matching her best in the 400 IM just 15 minutes later. UB made finals in the 400 IM, and has a great opportunity to move up the ranks later on tonight as she is seeded 8th going into finals. Noel and Ikelau start the meet tomorrow.

WOW!!! What a great session this morning as Team Palau went 5 for 5 best times, with Noel destroying his National Record in the 400 IM by 13+ seconds swimming a blazing 5:35! (yes, and he's only 12!) Roylin and Ikelau both dropped three seconds each in their 50 Backstroke events swimming a 35 and a 39 respectively. Shawn dropped over 3 seconds in his 100 Fly with a strong 1:09, and UB got her best time and made tonight's finals in the 200 Free swimming a solid 2:30. Everyone moved up from their original placings, and swam with sheer determination throughout the session. Keep thinking those fast thoughts everyone, our kids are feeding off it!