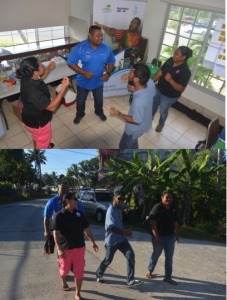 On the 28th of March 2015, the North Pacific Region OSEP team, consisting of Daniel Ramngen from the FSM, Kevin Harkey from Marshall Islands and Corrine Hideos from Palau along with the Zone Coordinator, Jubilee Kuartei and OSEP regional Coordinator Sainimili Talatoka came together for their first staff orientation here in the beautiful country of Palau.

The 29th proved to be a day of relaxation and fun for the Team as they were introduced to the Palauan hospitality.  A team building activity was organized for the Rock Islands. Smell of BBQ lingers in the air at the Rock Islands as the Team prepared lunch. The Team had time after lunch to snorkel some of the many sites at the Rock Islands. The Team was brought back to the hotel later that evening to rest and prepare for their first meeting in the morning the next day. A day well spent with great people!

The Team came together for their first official meeting on the 30th April at 0900 hours at the Palau National Olympic Committee (PNOC) conference room. The morning started off with the Zone Coordinator’s welcome and opening remarks by ONOC Education Commission member, Palauan Laura Mangham.   Jubilee Kuartei outlined the orientation purpose, program and outcomes.  The Team discussed challenges the program is encountering and solutions to address those challenges. Olympic Solidarity funding streams was also discussed and ways to tap into those funding streams. With assistance from the coordinators the Team members were able to see and comment on how their NOC’s is structured.

More discussions on the program’s and each NOC’s strategic plan were held in the afternoon.  The team did a team building activity at around 1630 hours by taking a short walk up to the Belau National Museum where the Team engaged in a short discussion about cultural issues that hinders the OSEP program.

The Team disengaged shortly after the discussion and adjourned for the day.