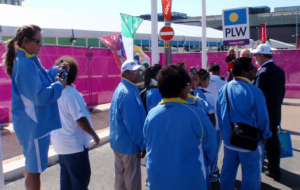 Team Palau Athletes arrived safely from Manchester where they spent a month training in preparation for the 2012 London Olympic Games.  The Team has settled in the Games Village at Seaside 3 Level 9 with the rest of the Oceania Teams.

Earlier today the Team Welcoming Ceremony was held in the Village Plaza at 10:30 a.m. This was the official welcoming of Team Palau to London where our nation's flag was raised in time with our National Anthem.  There was also a cultural performance written and produced by Great Britain's National Youth Theatre performed by kids between the ages of 18-24.

The traditional exchange of gifts by the Teams and the Village Mayor was also conducted and concluded with Chef de Mission Bill Keldermans signing the Olympic Truce Wall.  The Olympic Truce Wall dates back to Ancient Greece when it was used to allow athletes, artists and spectators to travel to Olympia to participate in the Games and return to their homes in peace.