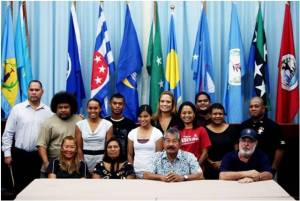 Team Palau to the London Olympic Games had an opportunity to meet with President Toribiong on Wednesday June 20th with members of the Palau National Olympic Committee and their respective coaches. The Athletes meeting with President Toribiong were four out of the five athletes confirmed to the Olympic Games, who are Ms. Jennifer Anson who will compete in the 63 women Judo event, Ms. Ruby Joy Gabriel in the 100m sprint athletics events, Ms. Keesha Keane in the 50m freestyle swimming event, Mr. Rodman Teltul in the 100m sprint event. Mr. Stevick Patris has qualified to the Olympic Games, but currently training with Paul Coffa at the Oceania Weightlifting Center in Noumea and will meet the Team Palau in London next month. Stevick’s mother Mrs. Hermana Patris, joined the athletes in meeting with President Toribiong to present updates of the Team preparation and participation to the Olympic Games and to extend appreciation to President Toribiong and the people of the Republic of Palau for always supporting the efforts of the athletes so that they may excel in sports and take on the opportunity to represent Palau at the Olympic Games.   Joining the Athletes are their coaches, Mr. Carson Olgeriil and Peoria Koshiba (Athletics), Ismael Aquon, President of Palau Judo Federation, Mr. Reagan Belechel, Coach for Judo, Ms. Tina Shima Coach for Swimming, and Palau NOC Officials, Mr. Frank Kyota President of the Palau NOC, Mr. Bill Keldermans, Vice President for PNOC and Chef de Mission for Team Palau to London, and Baklai Temengil Secretary General for Palau NOC.

President Toribiong message to the Athletes was to “give your best and Palau is proud to have you represent this country at the Olympic Games in London”. He continued to have a relaxed dialogue with the team on the benefits of sports and also sharing his own experiences in the sports of baseball. The Team will meet with President Toribiong again to officially receive Team Palau Uniforms that were donated by Hamatomo, a company based in Japan that has sponsored Team Palau since 2002. President Toribiong had an opportunity in his last travels to Japan to meet with the owners of Hamatomo Company to personally express his appreciation on behalf of Palau for Hamatomo’s commitment and continued support to Team Palau Olympic Games. Team Palau athletes will leave Palau on June 25th to train in Manchester England until the game in July. The Olympic Games is scheduled for July 27th to August 12. This is the 30th Olympic Games. For any information regarding Team Palau or London 2012 Olympic Games, please contact Palau NOC at 488-6562 or go to www.London2012.com.