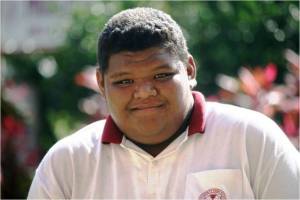 Jack Udui, Jr. from Ngkeklau, Ngaraard has been given the opportunity of a lifetime to run with the Olympic Torch as a result of hisinvolvement in London 2012’s international sports legacy program, International Inspiration.

He is amongst a group of 20 young people involved in International Inspiration who will take part in the Olympic Torch Relay in Nottingham in the UK on 28 June.

There will be one Torchbearer coming from each of the 20 countries which are part of International Inspiration, from Azerbaijan to Zambia. Each International Inspiration Torchbearer was nominated and selected either for their dedication and commitment to inspiring children and young people in their communities through the power of sport or for the personal challenges they have overcome in their lives.

Jack was nominated because of his participation with the Ngaraard Elementary School Running Club and his involvement in the Basketball Elementary After-School Competition.

International Inspiration is bringing to life the promise made by the London 2012 bid team where they pledged to reach young people all around the world and connect them to the inspirational power of the Games so they are inspired to choose sport. The programme is delivered around the world by a unique partnership of organisations includingthe British Council, UNICEF UK and UK Sport.

International Inspiration is enriching the lives of more than 12 million children in 20 countries around the world through high-quality and inclusive physical education, sport and play. The program is currently helping change the lives of over 12 million young people.

Jack said:“Being part of the afterschool programs has made my life better. I am active and will continue to be active in sport and exercise because I feel better. I lost 16 lbs since I began being active. I’ve made new friends through the elementary after school basketball competitions.   I really like feeling good so I want to continue to be active. When I joined the running club, everyone was amazed. I guess no one thought that with my size, I would want to join a running club. But I really enjoyed it because I felt better and I felt really good after losing some weight. I feel good about myself. My parents, teachers, and school mates are all amazed that I’m into sports and running. Now, I feel more comfortable participating in sports because I can move and feel much more active.”

Seb Coe, Chair of the London Organising Committee of the Olympic and Paralympic Games (LOCOG) said: “I’m thrilled that young people from around the world will also get the chance to run with the Olympic Flame. Jack has been a real inspiration in his community and truly demonstrates how sport can change someone’s life. Jack's story is truly inspirational.”