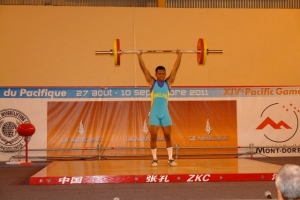 The day kicked off with Weightlifter Dmitri Villanueva’s event, where he snatched 93kg and did a max personal best of clean & jerk at a 110kg. Dmitri did his max in the event with total weight of 203 where he ranked 6th in his weight class.

The Table Tennis Team finished their events in the Singles where they won 1 single match and lost three matches. They also made it to semi finals in the doubles events. The table tennis players also participated in the team event, however, did not make it to the semi finals.    The two players from Palau (Dilon Meriang and Sam Saunders) played their best with other top athletes around region.

The Athletics Team 100m semi finals men Rodman Teltull went to Semi Finals and clocked 11’’60 with John Stills at 400m sprint clocking 51’’84 and his younger brother and Jacques Stills in the same event with a time of 51’’84.   The Athletics, Table Tennis and Weightlifting will continue their event and will finish the end of this week.

The Baseball Game between Palau and Guam started at 1pm today and at nine inning Guam scored 4 to 0 Palau loss. Palau will now wait for the game between CNMI and New Caledonia and will play against the winner of that game on Wednesday September 7th at 1pm. If Palau win this Game they will play Guam for the Gold Medal Game.

At tonight’s Team Palau meeting, all the Palau Athletes were mandated to go cheer for the Baseball Team tomorrow. The Team Palau athletes at the Pacific Games are all preparing Palau Flags, Banners, Cheer songs and slogans to ensure the baseball players play their best and bring home the Gold.

Events for Team Palau on Wednesday 7th September are athletics field events, Weightlifting, Beach Volleyball at 9am and Baseball at 1pm. The events are also highlighted on Channel 65 sponsored by PNCC.