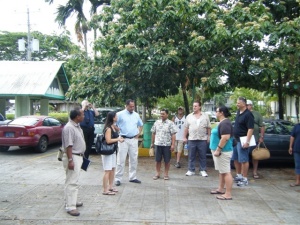 The Micronesian Games Organizing Committee and the Micronesian Games Council co-hosted a meeting of the Micronesian Games Council and Chef de mission meeting to update participating countries of the preparation of the games here in Palau, from 10-11, March 2010.  The meeting was attended by delegates from Guam (Ms. Mary Perez, Kelly Blas of Guam NOC and Chef de Mission Neal Krantz for Team Guam to the Games), Terry Sasser, Secretary General for Republic of Marshall Islands NOC and Mr. Mike White, President of CNMI Sports Association and Keitani Kramer of Chuuk  State.  The meeting provided the opportunity for  the organizing committee to update each countries the preparation to host the games and to provide detailed information about the sports events, sports regulations, contacts for sports directors and site visits at each sports venues, and the games village.  The delegates also had some time to discuss propose changes to the games charter and other important issues pertaining to the Micronesian Games that needs to be further discussed and voted for during the games time in August here in Palau.  The two day meetings concluded on 11 March 2010 were the games  delegates joined the Palau leadership and games organizers at the games fundraising dinner at Ngarachemayong.    The next meeting for the games council is schedule for 8 August 2010 during the games here in Palau.  The 7th Micronesian Games dates are 1-10 August 2010, Palau.