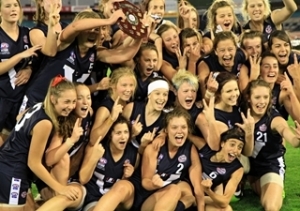 Victoria were all class as they raced to their third AFL U18 Youth Girls Championship in Adelaide, completing the 2012 tournament undefeated.

The side were further honoured with 8 players named in the team of the tournament.

As Port Adelaide FC played one of the most devastating final 10 minutes of a game, turning a 32 point deficit into a 2 point victory at AAMI stadium, the crowd were pumped and several hundred hung around to see Victoria take on Queensland in the Grand Final of the Youth Girls Nationals a curtain closer to the AFL game.

The first quarter showcased Queensland’s “never say die” attitude as they kept the Vics scoreless for the first 8 minutes something no other team had been able to achieve during the Champs. Jasmine Garner proved the difference between the two teams making herself a formidable target in the forward line and helping Vic get 2 hard earned goals for the quarter. Q’s Megan Hunt was a ferocious tackler but didn’t have enough support when the ball spilled free. She certainly stemmed the hard running of the Vics at times.

The second quarter proved frustrating for the Northerners as they had the ball in their forward 50 for the majority of the quarter yet it didn’t show on the scoreboard. Meanwhile Victoria were solid in defence and ran hard off their half back line through the courageous Tayla Zammit where Garner slotted another 2 of her 5 goals for the match. Emily Bates battled hard for Q and was supported by Tayla Harris who took some great overhead marks to try and get the ball into the goal square.

Half time the Vics were 31 points up to Q yet to open their scorecard.

Q lost their ruck during the second quarter and found it difficult to overcome her loss at stoppages during the second half as the Vics dominated ruck taps and directed the ball accurately to their onballers. Garner continued her dominance in the forward line taking a number of exceptional marks despite some close marking from her Q opponent. The Vics piled on another 3 goals whilst Q battled hard to get their first for the game.

3rd term ended with Vics up by 44 points.

The fourth quarter would have been frustrating for the Queenslanders as they again received no reward for their efforts despite having the majority of the possession. Hunt niggled the Vics whilst Zammit and Rhiannon Banner were still running hard. Late in the term the Vics added another 2 goals to put the result beyond doubt. Queensland battled hard but were outclassed by a skilful unit.

All Australian team by position and state: