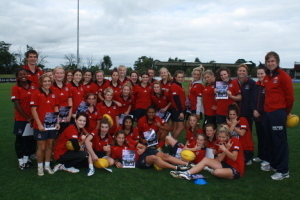 The Melbourne Football Club was very happy to have current Victorian State player and member of the Diamond Creek Womens Football Club, Katie Loynes, as well as current Victorian, All Australian and Port Melbourne Assistant Coach, Peta Searle present for the second day of the Academy, which took place at Casey Fields in Cranbourne.

Katie became involved in a range of different activities, which helped Academy members broaden their knowledge about a range of different aspects of football, both off and on the field. Peta took the girls through a presentation on effective kicking, which caught the girl’s attention and got them all thinking. All 40 girls found it a very informative and interesting presentation, learning many new things. All girls were excited and couldn’t wait to take what they had learnt from Peta’s presentation back to their local clubs and schools.

Katie’s presence throughout the day was also much appreciated by all girls participating, as they had the chance to ask her many questions about her football career to date, and about the direction of where female football is heading. It was fantastic to have a member of the VWFL and a State representative present on the day, as it really cemented the partnership between the VWFL and Melbourne Football Club that has been growing for many years.

The Melbourne Football Club is a great supporter of the VWFL and female participation, while the Tridents Girls Football Academy is a great initiative, demonstrating the Clubs support and providing a great opportunity to develop players not only as footballers, but also as people. All girls had a valuable experience, and are very excited about where the future of female football is heading.

The girls also were lucky enough to have Robbie Campbell, former 2008 Hawthorn premiership player, come along on day two from Draft Star. Robbie took the girls through a range of different draft skills and fitness tests, as well as a discussion on goal setting and values for their clubs and themselves as footballers and young women. This provided the Academy girls with an insight of what it takes to make the AFL draft, along with different aspects of football off the field, which they can take back to their local clubs and schools.

Another guest speaker the girls listened to was the Melbourne Football Club dietitian, Jo Shinewell, who provided the girls with information regarding nutrition, diet and hydration.

The pathway of female football is ever growing and developing, and to brief the girls on where this space is heading, Female Development Manager from AFL Vic, Chyloe Kurdas spoke to the girls about the different paths which the girls are exposed to, which made many think about the path which they would like to head down, whether that be to play senior football or take a different approach with involvement in coaching or administration.