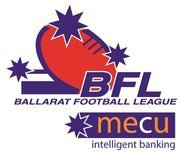 The Ballarat Youth Girls representative team has won the 2012 VLine Cup in their debut year.

Coached by AFL Victoria's Regional Development Manager, Tim Shearer, the Ballarat Youth Girls played off in the Grand Final against Geelong after convincingly beating Bendigo the day before. In a closely contested match, Ballarat looked to have opened up a safe lead in the closing minutes of the game. Geelong however dominated the stoppages and maintained front position to work their way back into the game. A late goal from a free kick and subsquent fifty metre penalty saw Geelong get to within a point of Ballarat. A clearance from the ensuing centre bounce and some open play allowed Geelong to have a shot on goal within the last fifteen seconds of the match. The inaccurate kick evened up the score to leave the game as a draw. VCFL rules meant the game would be left as a draw and the overall winner to be decided on percentage from previous games. Ballarat, having enjoyed a larger win than Geelong the day before, was named as the 2012 VLine Cup Youth Girls champions.

In the play off for third and fourth, it was the debutants from Hampden who took the honours. With many girls having only played a handful of games, the Hampden girls teamed up well after half time when scores were even. Bendigo appeared to run out of legs on Preston City Oval's open space, giving the Hampden girls more opportunities to score.