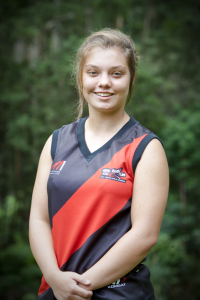 Victorian representative Ellie Blackburn has been awarded the Minister's Award for Sportsperson of the Year at the 2011 Victorian Government's Community Sport and Recreation Awards.

The awards caps of a brilliant year for the sixteen year old Berwick midfielder. Ellie's 2011 achievements include:

The Minister's Award for Sportsperson of the Year recognises an act(s) of sportsmanship by an individual, team or club, with consideration for fairness and respect for teammates, officials and / or competitors. Recognises a sportsperson who embodies the true spirit of sport –‘Its not if you win or lose, but how you play the game’. This behaviour may be a single act of sportsmanship or a longer term contribution.

Ellie's nomination was strengthened by her off field efforts. Whilst enjoying great on field success, she balanced this by being one of the first to volunteer for community progams. She has participated in community events for the City of Casey, under 12 junior girls SEJ come and try days, Auskick player appearances and has delivered clinics to girls and boys in local schools as part of her school Academy commitments. Minister for Sport, Hugh Delahunty, acknowledged the importance of achieving a balance in life and so her solid academic results also played a part in the decision to give Ellie the award.

As a footballer, Ellie works tremendously hard to prepare herself as an elite footballer. She has combined her study program with a football academy, ensuring continued football and academic development. Ellie seeks critical feedback from her coaches and mentors, working hard to overcome her weaknesses.

Ellie is one of many future stars of our game, playing for Berwick JFC's Youth Girls team in the South East Juniors league in Melbourne's south east. She has now turned her attention to preparing for the upcoming season and Victoria's defence of its title at the AFL's Under 18 National Championships in May.