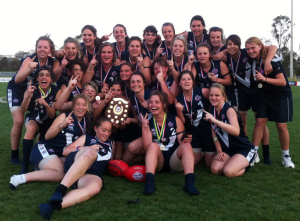 Victoria overran an athletic Western Australia in the final of the 2011 AFL National Under 18 Youth Girls Championships on the Gold Coast.

In a replay of last year’s Grand Final of the Under 18 Youth Girls National Championships, it was obvious the crowd favourite was Western Australia, with Queensland, South Australia and NSW/ACT all lining up to cheer on the underdogs.  Western Australia won the toss and opted to kick against the three goal breeze that prevailed throughout the game. Western Australia looked like scoring first when Sabrina Traub kicked into the player on the mark whilst going for the first goal. It didn’t take long for Victoria to capitalise on Traub’s mistake with Bianca Jakobsson kicking Victoria’s first major. Western Australia again had the opportunity to score but could only kick 2 behinds.  With Victoria smelling blood early they went in for the kill with Jasmine Garner kicking her first and Bianca Jakobsson her second for the quarter.  Score at the quarter time break 3.1.19 to Vics with Team WA 0.2.2.

Some desperate attacking football from Western Australia’s defence saw Victoria struggling to get the ball inside their forward zone.  Western Australia used the ball and wind better. Traub ended up in the right place at the right time with a well weighted kick into the goal square for an easy goal.  With the breeze again picking up Victoria were again struggling to get the ball out of Western Australia’s forward line.  Some cute chip kicks around the half forward line eventually ended up in the arms of Tiah Haynes (WA ) who scored a good 40m goal.  Sara Noga (WA) dominated in ruck contests around the ground and made it difficult for the Victorians to get any clean possession.    Midway through the 2nd quarter Ashlee Atkins (WA) attempted a kick on goal to have it land in Traub’s safe hands.  Her conversion on goal almost snapped the upright in half.  Soon after Atkins was able to convert with a great kick from 40m out.   With the pressure mounting free kicks started to be handed out more regularly and players physicality was at a high.  There was certainly no love lost between these two teams with Western Australians wanting to go to the break ahead of their nemesis Victoria.  Half time scores saw Victoria trailling WA 3.1.19 to 3.5.23.

Victoria came into the third quarter with the breeze and slotted two quick goals through to regain the lead, whilst Western Australia countered with a solid run up the park but could not penetrate their forward line to get the points on the board.  Victoria returned the ball to their goals securing another goal.  Late in the third quarter, Western Australia’s Kellie Marie Gibson secured a backwards running mark and converted to bring WA within nine points against the wind to set up an exciting last quarter.

A tough start from both teams in the fourth quarter, Victoria got the ball into their fifty with lots of numbers and made it count on the board, scoring the first goal of the fourth quarter.  Victoria’s Louise Stephenson was moved into the ruck, giving their midfield first use of the football into the wind. Victoria’s Emily Smith secured a great mark early but she was unable to convert.  Victoria’s Ellie Blackburn was unstoppable as she lifted another notch, whilst the Victorian defence lifted another gear, with Victoria’s Georgia Punton intercepting Western Australia’s forward line delivery. The ball again found its way into the arms of Traub who goaled to close the gap in their only score of the quarter.  Great defensive pressure from Victoria all over the ground allowed them to dominate possession, whilst some excellent run and carry play by Bianca Jakobsson and Tayla Zammit gave Victoria’s forwards vital opportunities on goal. At the final siren, Victoria claimed their second consecutive national title, with a ten point victory against Western Australia.

Earlier in the day, AFL Victoria's Development team defeated ACT/NSW for the second time in as many days to finish off a very competitive carnival in fifth place.

A full wrap up of the Championships can be found here.