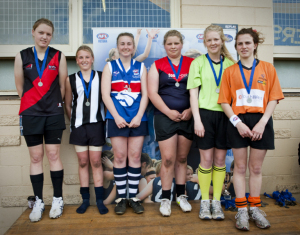 The inaugural Warrnambool Youth Girls competition came to a close last night, with players honoured at a Presentation Night. Individual efforts were acknowledged via the 2011 Best and Fairest Award vote count. The voting over the five game season was very close, with only one vote separating the winner, Nikita Gilmour (8 votes) from Runner Up, Kelsey Perry (7 votes). Amanda Gavin (6 votes), who played only three games due to State training commitments, finished in third position.

Best Team Players awards were announced, acknowledging the leadership and selfless play of an individual from each team over the competition. The winners of these awards were:

The Best Conducted Team award was hotly contested, with all teams ending up with a perfect score from the umpires on players’, spectators’ and officials’ behaviour. In the end, it the Warrnambool Football Club’s Blue team that was deemed to have the edge over the other teams in their conduct both on and off the field.

The competition also bade farewell to Kellie McLeod, the sole graduating player from this year’s competition.

Finally, the competition’s Team of the Year was announced, with twenty-four players acknowledged for their outstanding work over the season. These girls will be automatically invited to try out for the inaugural Warrnambool Youth Girls representative team that will play in the 2012 VLine Cup.

AFL Victoria and the Warrnambool District Football Netball League have now turned their attention to 2012 and finding three new clubs to be a part of Victoria’s newest Youth Girls competition. A local steering committee has been formed and will work with the local football community to source new clubs.