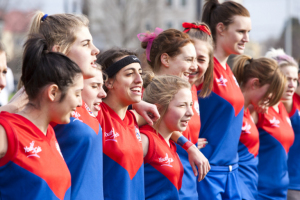 St Albans Youth Girls won their second consecutive Western Youth Girls Grand Final on Saturday with a resounding win over Sunbury. Having not conceded any score in their first semi final, the St Albans formidable defence kept Sunbury to a solitary point in the season finale.  Jasmine Garner's work rate typified her end of season form that has made her St Albans' dominant midfielder, controlling the game wherever she went, whilst Sunbury's Hannah De Raad showed why she is now considered an elite footballer, with classy ball use and a fine ability to win the hard ball. Sunbury, who had worked hard to overcome a form slump at the end of the season to make their a record sixth consecutive grand final, didn't have the depth to cover St Albans in their forward line, and found their hard work coming undone across half forward. At the final siren, the best team of the season had clearly earnt their spoils, finishing the season undefeated premiers. Both Garner and De Raad were named as Best on Ground for their teams by the umpires.