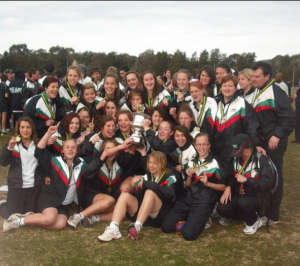 Victoria's Under 16 School Girls finished their first School Sport Australia National Football Championships undefeated. The inaugural competition featured teams from all States and Territories except for Tasmania and Queensland. Victoria's experience and player development was evident as they kept all opposition sides scoreless until their final game against an undefeated Western Australia. With no grand final to play and the National title to be decided by a top placed ladder result, the Championship hinged on the final game of the carnival. In a tight affair, Victoria managed to keep WA out of reach, claiming a 33 point victory. Aside from the National Title, the emergence of some excellent younger Victorian talent will keep under 18 selectors busy and under 18 State squad players on their toes. AFL Victoria congratulates School Sport Victoria and all Victorian Under 16 School Grils team representative on an outstanding performance.