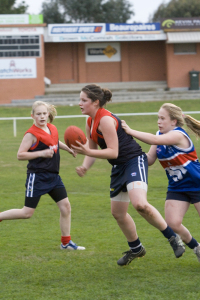 The inaugural Warrnambool Youth Girls competition began last night following a year of planning and preparation by AFL Victoria. Four teams, representing the Warrnambool Football Netball Club and the Warrnambool District Football Netball League, played nine a side matches on Mack Oval. Forty girls played in round one, with most having never played the game before. There were a number of stand out players, as well as great improvement by all the newcomers. WFNC’s Blue team were dominant over the WDFNL’s red team, whilst the tables were turned in the other match, with the WDFNL’s Yellow team outclassing the WFNC’s White team.

Games will be played on Mack Oval for the next four weeks, with new girls more than welcome to come along and join in. Participation this year is free for all girls. Any girls interested in playing should contact the WDFNL’s General Manager, Diane Membrey (p: 55620169 – m: 0409194030 – e: wdfnl@bigpond.com)

Photos from Round 1 can be found in the ‘Photo Gallery’.

All results and fixtures can be found here.