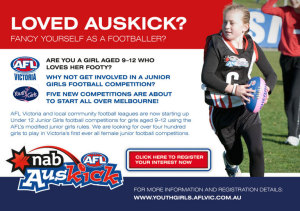 AFL Victoria is seeking over 400 girls aged 9-12 to play in one of five new junior girls competitions around Melbourne in 2011.

The new competitions will be established in local leagues as per regular community junior football, with matches operating under the AFL's Junior Match Policy. Girls with no experience are more than encouraged to get involved in the new concept, as well as those who have played Auskick or junior football alongside the boys.

AFL Victoria and local Victorian junior football leagues decided to establish junior girls football comptitions to cater for those girls who are keen to play regular football matches, but not alongside boys.

There were over 3000 girls particpating in Auskick in 2010, with very few transitioning to play junior football alongside the boys. AFL Victoria and local leagues believes that these new competitions will help keep girls in the game for longer.

"Never before have junior girls in Victoria had an opportunity to play community football in an all female environment. With the learning that we have gained from running the Youth Girls compeition, we know that girls love playing football with and against other girls in an environment that provides them with fun, regular activity as well as the opportunity to make new friends".

With the AFL's strategy of establishing a national elite televised women's competition by 2020, Kurdas believes that these junior girls competition may begin the football careers of some future AFL stars.

"Given that the national competition is scheduled to start by 2020, girls aged 9-12 are just the right age to begin taking their first steps towards playing in the AFL's first ever women's league".

Any girls or parents with daughters who are interested in these new competitions can click here to register their interest.