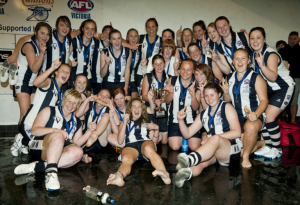 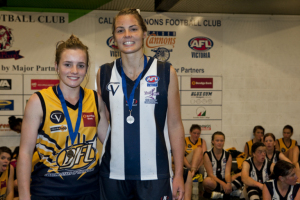 The Geelong and Bendigo JFL Youth Girls teams must have had a sense of deja vu as the heavens opened to release torrential rain creating scenes reminiscent of last year's championships. Played on the Victorian Country Football League's VLine Cup Carnival Day at Highgate Reserve in Craigieburn, both teams fought out the match in near impossible conditions on the MCG sized ground.

The Geelong girls had a little more depth across the ground, allowing them to score more freely. Bendigo's tall forwards struggled in the conditions to find the football in a day made for ground runners. Both teams had numerous stand out performers with Geelong's Maddie Boyd (pictured bottom right) and Bendigo's Shelley Tuohey (pictured bottom left)receiving Best Team Player honours.

Photos can be found in the 'Photo Gallery'