2011 Youth Girls Academy kicks off with Camp in Toolangi 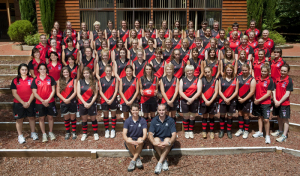 The second annual Youth Girls Academy Camp was a great success as the 2011 squad of 80 players, umpires and staff took to Alpine Ash Retreat near Toolangi.

The girls spent Saturday working with the Victoria Police and their High Challenge Program involved in team building exercises for the second consecutive year.

The evening session was dedicated to identifying the key values that will drive this year's Academy squad, and the formation of an Academy mission statement.

Sunday had the girls up and running at 6am with a 3km jog for both umpires and players. Then after breakfast, Umpires coach and former AFL umpire Martin Ellis ran a session about the laws of the game.

The players then worked with Academy coach Andrew Jago on their fitness, game sense, kicking and did some contact work before the close of another successful Academy camp.