Football has Lost a Pioneer and a Hero 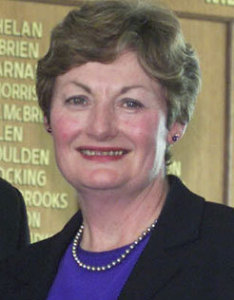 FOOTBALL lost a pioneer, a hero and a great ambassador for women with the sad passing yesterday of Jill Lindsay.

Lindsay, who worked for the VFL/AFL for 41 years, lost a long battle to cancer, but legacy will live on in many ways.

Mick Daniher, acting AFL Victoria CEO said “Jill had tremendous passion and commitment for any role she was involved in at the VFL/AFL”.

“Jill was as enthusiastic in her AFL ground operations manager role in 2010 as she was helping country development officers arrange tickets for country children to attend VFL games in 1981” he said.

Since 1991, Lindsay held the post of AFL Ground Operations Manager and last year’s Collingwood/St Kilda Grand Final Replay was the 43rd Grand Final at which she officiated.

She is the only woman to be awarded VFL/AFL Life Membership.

The AFL Commissioned a scholarship in her name in recognition of her outstanding service and to encourage women to become involved in sports administration.
The Jill Lindsay Scholarship will become a prized annual award.

Football was not her sole sporting passion. Lindsay was a gifted softballer who represented NSW and Victoria and later coached and served the sport as an administrator.

She received the Australian Sports Medal in 2000 for her services to softball.

Lindsay is survived by her mother Marjorie, sister Robyn Torpy and brothers Graham and Ross.

Lindsay served as an inspiration for all those who worked with as evident by the cavalcade of touching tributes from everyone from Collingwood president Eddie McGuire, former Sydney Swans premiership coach Paul Roos to Michelle Clyne, the AFL’s Publicity and Promotions Manager, who viewed Lindsay as her inspiration.