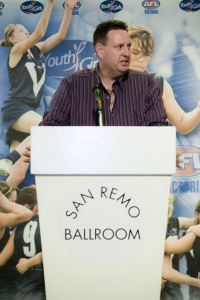 2010 Victorian Head Coach, Andrew Jago, has been announced as the coach of the 2011 Youth Girls Academy program.

A sport psychologist who is fresh from completing his level three coaching accreditation, Andrew brings excellent credentials to the 2011 Academy. Andrew jumped at the opportunity to be involved in the Youth Girls talent program again, having steered Victoria to the inaugural AFL National Youth Girls Championship Title in 2010. As Academy Coach he will also serve as Head Coach of the 2011 Victorian Youth Girls Team, giving him nine months to develop a Victorian team.

AFL Victoria's award winning Youth Girls Academy is based at the Essendon Football Club and is proudly supported by the Bill Hutchison Foundation.