Eva and Peers Honoured With Medal 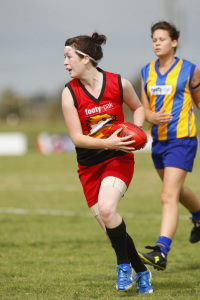 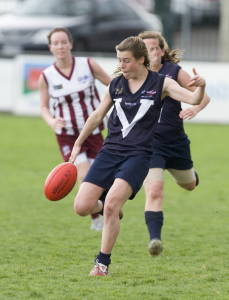 Two of AFL Victoria’s longest serving players, Alicia Eva and Chloe Peers, have been honoured with the naming of a new annual medal at AFL Victoria’s Youth Girls Presentation Night last week. Each year the Eva-Peers Medal will be awarded to the player adjudged by players and coaches of the Victorian Under 18 team for outstanding on and off field performances throughout selection, training and representative duties.

AFL Victoria deemed it to be appropriate to acknowledge the prestige associated with this medal by naming it after two of our former Youth Girls, both of whom displayed these traits and characteristics in abundance, and to acknowledge their outstanding contribution during their Youth Girls playing career and beyond. Both Peers and Eva would have been in running to be awarded this medal if they were still young enough to play in the Youth Girls competition.

Both Eva and Peers were players of the first ever Youth Girls competition in 2004, playing in each season until they turned 18 in 2009 and were too old to continue playing. At the end of 2009 they were last two players from the inaugural Youth Girls season, having enjoyed six years of Youth Girls football. Both are now forging respected senior football careers in the Victorian Women’s Football League.

Chloe Peers (pictured top left), a former premiership player, played in the first three Victorian Under 18 teams, winning Player of the Championships in 2007 in the inaugural Interstate Challenge. She played in the South East (now DDJFL) Interleague team for three years. She has also made a valuable contribution back to the Youth Girls competition since her graduation to senior ranks in volunteering to be the Eastern Interleague Team Manager. She is also a member of AFL Victoria’s Female Football Development Squad, running clinics in schools for girls to promote our game.

Alicia Eva (pictured bottom left)was the 2009 Victorian Under 18 Captain. She is the most experienced player of her age in Australia, with over 160 games to her name at the age of 19. She is also a former Youth Girls Best and Fairest winner and during her six years in Youth Girls competitions won four premierships. Alicia has also returned to make a contribution to the Youth Girls competition. She is now East Malvern’s Coach, was the 2010 Eastern Interleague Assistant Coach and Victorian Under 18 Assistant Coach.