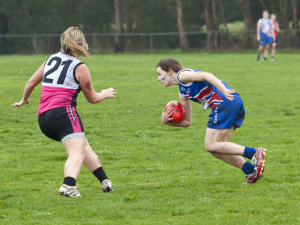 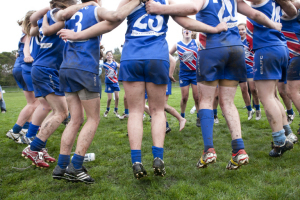 East Malvern has defeated Chirnside Park for the second consecutive year in the 2010 Eastern Youth Girls Grand Final. Having not lost a game all season, the pressure was on East Malvern to not fall at the last hurdle. A drizzly and slippery day greeted both teams and from the opening bounce the match looked like it could have gone either way. Chinside Park provided great pressure around the stoppages, with excellent numbers on the contest, whilst East Malvern failed to capitalise on their opportunities. An injury to leading goal kicker and Chirnside Park star, Caitlyn Wilson, in the second term tipped the balance in favour of East Malvern, but it was not until the third quarter that East Malvern found the rhythm they had played with all year. When East Malvern's large collection of top age players clicked the game was always going to be a difficult task for the gallant Chirnside Park. At the final siren, East Malvern had claimed their second premiership in as many years by five goals.