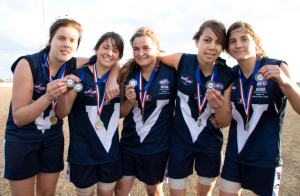 Eight Victorians have been named in the 22 player ‘All-Stars’ team at the inaugural AFL National Youth Girls Under 18 Championships. Five members of the Victorian team were selected alongside three of the AFL Victoria Development Team members.

Victorian midfielders Georgia Punton, Mandi Watts and Jessica Dal Pos, and forwards Jasmine Garner and Emily Paterno were named in the All-Stars team, whilst up and coming Development Team players Danielle Hardiman, Madeline Keryk and Alexandra Quigley were recognised for their efforts.