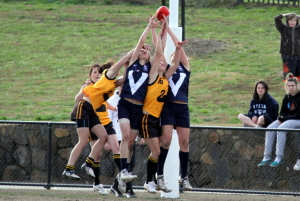 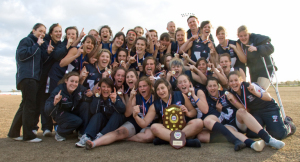 Played on the expanses of Craigieburn's Highgate Reserve, the game opened with a physical tightness that is typical of grand finals. Western Australia, kicking with the wind, was the first team to put a goal on the board whilst Victoria failed to score a major in the first term. The Victorians capitalised on the wind in the second, kicking three unanswered goals. After having much of the play in the third, the Vics coudn't could only manage minor scores and allowed WA to kick a couple of late quarter goals. Taking a one point lead into the final term, the final quarter was set to be a nail biter, but with the Victorians enjoying the breeze in the final quarter they felt confident of holding off an impressive WA team. A courageous mark and follow up goal by the experienced Georgia Punton was a game changer. The Victorian intensity had lifted as they sensed victory was close. A break in play after an injury to Victorian Deputy Vice Captain Jessica Dal Pos only lifted the Victorian's resolve, as they ran out the game fifteen point victorious.

Earlier in the day, AFL Victoria's Development Team claimed a win over ACT/NSW to claim fifth spot in the championships.