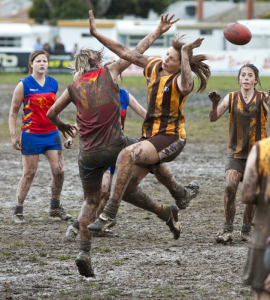 
Played on the expanses of Kangaroo Flat’s Dower Park, minor premiers Huntly went into the game as favourites, having not lost a game since round 2 of the home and away season. Marong, however, having tasted defeat in last year’s grand final, were determined to ensure that their brigade of final year players were farewelled with a mighty effort.

The ground conditions reflected Victoria’s wettest winter in thirteen years, and with another inch of rain falling in Bendigo overnight, Dower Park resembled a mud bath. From the opening bounce the match was a tight tussle, with neither team able to gain an advantage. Goals were difficult to come by and the leading margin never exceeded eight points throughout the match. With seconds left on the clock in the final quarter, Marong, trailing by a point, were able to rush a behind as the siren sounded, creating the first drawn grand final in Youth Girls history.

After a two minute gathering with their respective coaches, Huntly and Marong then took the field for two additional five minute periods of play. Huntly got the jump on Marong early, scoring a behind within the first two minutes of extra time. With the rain teeming down, behinds were rare and goals extinct by this stage. Huntly defended and defended brilliantly for all but the final seconds of the final extra time term. A Marong free kick was awarded in their forward line moments before the siren sounded. A Marong behind was scored after the siren from the free kick, drawing the game once again and sending it into the first ever Youth Girls ‘Golden Score’ scenario.

Exhausted, wet and mud coated, the match resembled a gladiator-like survival of the fittest contest. The girls defiantly continued to battle the match out, eager to be the first team to score and claim victory. A four hundred strong crowd groaned, winced and cheered alongside the girls as the ball was unable to move beyond the half forward lines of both teams. After around twelve minutes of extra time, it was Marong’s Jess Day who was able to permeate the defence and score the most important and match winning behind. As the siren sounded acknowledging Marong’s triumph, both teams fell to the mud exhausted from the occasion. The crowd, knowing they’d just witnessed something special, applauded the efforts of both teams. With the presentation of a premiership cup a mere formality, both clubs were acknowledged for their outstanding display of sportsmanship, courage, endurance and willingness to give their best.