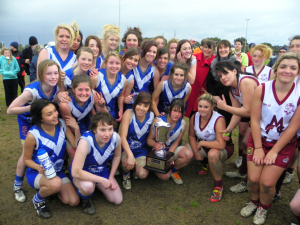 Sunbury Youth Girls have defeated Melton by thirty-eight points in the third annual Joanne Duncan Cup. Played at Sunbury's Boardman Oval, a large crowd turned out for the event, which is played as part of Sunbury's regular junior football fixture.

Sunbury was especially pleased to have both the State and Federal members for Sunbury in attendance on the day with Joanne Duncan MLA, the State Member for Macedon, and Maria Vamvakinou MP, Federal Member for Calwell cheering their girls on.

This event has been supported by the Melton Football Club since it's inception in 2008, and provides an opportunity for both clubs to showcase Youth Girls football and the pathway that can exist for girls.

Photos from the day can be found here.