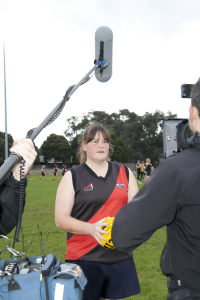 On Tuesday night at Kilsyth, eleven Youth Girls Academy members had a chance to train with the Eastern Ranges TAC Cup squad.

The boys’ skill was at an elite level which encouraged the girls to be precise in skill execution and work hard to keep up.

Though the boys seemed intimidating at first the Ranges players were very welcoming, and were excited to have us join in. They were impressed with our kicking and marking skills as well as our voice and communication.

East Burwood’s Sarah Perkins was invited by the Channel 9 show TAC Cup Future Stars to participate in a goal-kicking competition against AFL Hall-of-Famer Collingwood great Peter Daicos. Perko did well in the competition threading a banana from the boundary as well as a barrell from fifty.

While some girls worked on their transition in full ground drills, two of the girls got the chance to sit in on a meeting with a veteran Ranges players and his coaches to review his game from the weekend using footage from the game.

At the end of the night Chyloe reinforced the importance for intensity, fitness and good skills and encouraged us to lead the way in lifting our game for our female teammates and opponents.