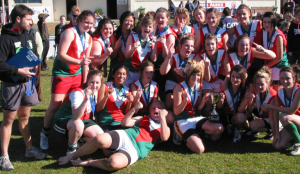 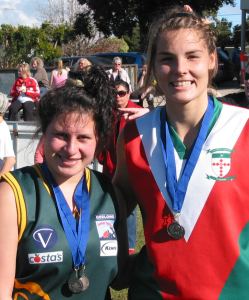 The Geelong Youth Girls Football season culminated in the Grand Final between Clonard and last year’s champions, Leopold played at Highton Reserve on Sunday. The Clonard girls emulated Leopold’s effort from last season when they ran out convincing winners to remain undefeated and also earn the tile of Champions. The match was played in perfect conditions and a large crowd enjoyed the highly skilled and entertaining spectacle.

Leopold scored the first goal of the game and were well in the match at quarter time as Clonard kicked an inaccurate 1 goal 8 behinds for the term but from then on Clonard gradually increased their lead to run out deserving and impressive 43 point winners.

Best afield for Clonard was Maddie Boyd in ruck, while Kristi-Lee McRae was Leopold’s best player, tireless in defence all day.

More photos can be found in our Photo Gallery.