Girls Take Over The MCG 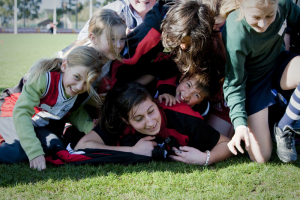 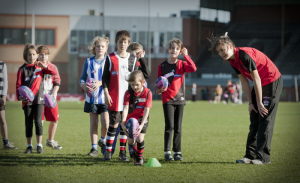 AFL Victoria is committed to increasing female participation in Australian Rules Football. On Sunday 11th July 160 female NAB AFL Auskick participants participated in an all girls Super Clinic at Windy Hill, with the majority of those girls travelling on to play during half time at the MCG that same afternoon.

The young Auskickers, who travelled from all over Victoria were eager to display their skills. The Super Clinic was conducted by over 30 of Victoria’s most promising under-18 female players from AFL Victoria’s Youth Girls Academy. Participants got to work on their goal kicking, handballing, and marking skills. The Youth Girls players proved to be great role models for the young aspiring Auskickers.

While the Super Clinic was being conducted, the parents enjoyed tea and coffee at the Essendon Social Club and AFL Victoria’s Female Football Development Manager, Chyloe Kurdas, delivered a presentation on the AFL’s vision for a National Women’s Competition and the female football talent pathway. The presentation was very successful with parents able to get an understanding of the depth of opportunities available in female football both now and into the future.

At the completion of the Super Clinic all participants took home an Essendon FC show-bag and a brand new Youth Girls football.

For 130 girls the fun did not stop there, they left Windy Hill and travelled to the hallowed turf of the MCG. These lucky participants were then given the opportunity to play during half-time at the Melbourne versus Essendon game that afternoon whilst the Academy members umpired. It was difficult to determine who was more excited - the players, umpires or some of the mums and dads who were given goal umpiring duties at half time and the opportunity to grace the turf.

With our first female Prime Minister now in office, sworn in by a female Governor General, it was timely to see the entire MCG field filled with female football players, definitely an encouraging sight!

The girls thoroughly enjoyed the opportunity to play football with their peers, especially on the MCG. The day was a big success with many smiling faces leaving the MCG after an experience they won’t forget.

A big thank you to our AFL Victoria Youth Girls Academy and the Essendon Football Club.