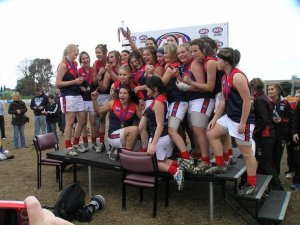 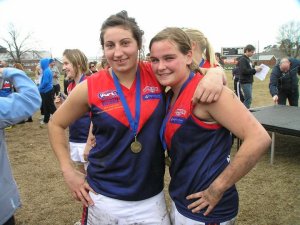 Ever since the DDJFL (formerly South Eastern) and the Western Youth Girls contested the first ever interleague match in 2007, the two teams have had a fierce rivalry. The DDJFL, who easily accounted for the Western team in the first round of this year's Metropolitan Championships, were the clear favourites having never lost a game in the competition's four year history, and with comprehensive wins over the Eastern and Northern teams under their belt, the DDJFL girls went into the game with lots of confidence.

From the opening bounce however, the game was a hotly contested affair. The Western girls tackled hard, putting lots of pressure on their DDJFL counterparts, who struggled with Western's quick transitions. Scores were even at the first and second breaks, and it took a lapse in concentration from the Western in the third to allow the DDJFL to kick three quick goals. The Western girls rebounded, kicking a handy goal before the third term siren to bridge the gap to thirteen points. In the fourth term, it was the class of the DDJFL girls by foot that was the difference as they were able to resist the Western team's ongoing pressure.

AFL Victoria congratulates not only the DDJFL on their victory but the girls from all of the four interleague teams on their efforts over last two months. Thank you also to our volunteers and support staff.