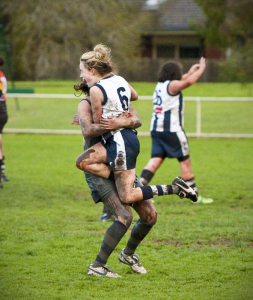 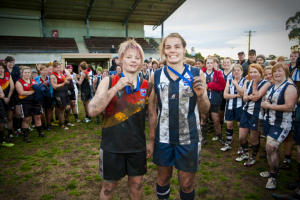 On the coldest day in the last two years, representative teams from Geelong and Bendigo contested the 2010 Youth Girls Country Championships. Played as part of the Worksafe VCFL's V-Line Cup, the inaugural Championship match turned out to be a thriller. With wind, rain and mud all playing their part, the Geelong girls got the jump on Bendigo, using the wind to kick four unanswered goals in the first term. Bendigo, which was left to play catch up for the remainder of the game, worked their way in to dominate the remaining three quarters. At the last change three goals separated the two country teams and Geelong looked to have an easy win. The tenacity of the Bendigo girls saw them kick two unanswered goals, but a rugged Geelong defence was defiant. With the enthusiastic U15 Geelong boys' team enjoying the match, loudly cheering and willing their female counterparts over the line, the Geelong girls claimed victory by five points.

With U18 Victorian Coach, Andrew Jago, observing the country girls for the first time, there were many impressive individual performances across both teams.

AFL Victoria would like to thank the VCFL and V Line for their support of the 2010 Youth Girls Country Championships.

More images from the game can be found in our Photo Gallery.