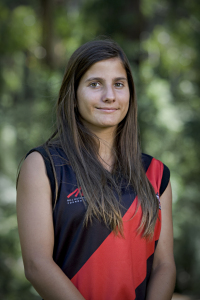 Melbourne’s most promising under 18 female players have been vying for selection in one of the four interleague teams that will participate in AFL Victoria’s Metropolitan Junior Championships next month. Girls from Bendigo and Geelong are about to begin selection training for the inaugural Youth Girls Country Championships that will be played as part of the VCFL’s V Line Country Cup in June.

The Metropolitan Junior Championships bring together the best talent from Victoria’s metropolitan leagues for Under 14 and 15 boys and under 18 Youth Girls players. With the cream of the Victoria’s Youth Girls talent playing in the competition, Victorian selectors and coaches will be watching on eagerly. Exciting newcomers Jasmine Garner (Western), Adriana Piva (Eastern) and Steph De Bortoli (Eastern) will be looked at closely, whilst the class of Ellie Blackburn (DDJFL), Chloe McMillan (DDJFL), Mandi Watts (Western) and Jess Dal Pos (Northern, pictured) will be a key feature of the competition. In addition, the Dandenong District Junior Football League (DDJFL) will have three sisters playing alongside one another, with identical twins Georgia and Sarah Punton joined by younger sister Jasmine for the first time at representative level.

The evolution of Youth Girls football in Geelong and Bendigo has seen the creation of a new Youth Girls Country Championships. The Bendigo girls competed in the Metropolitan Championships in 2008 and 2009, however the new Country Championships will allow them to now play against their regional counterparts from Geelong. This exciting new initiative will give girls in Geelong their first opportunity to showcase their skills, and will give many boys from the VCFL their first glimpse of female football.

Feedback from previous competitions about such integration continues to remain positive, with parents, spectators and players all enjoying the opportunity to support their local talented boys and girls together. Integration of these two female competitions with their male equivalents will only continue to foster greater respect between male and female players, and provide the Youth Girls competition with valuable exposure.