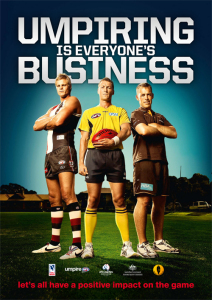 The AFL's 'Umpiring Is Everyone's Business' campaign was launched this week in the lead up to this weekend's games.

The campaign aims to communicate the following messages:

1. Umpiring is everyone’s business – whether you are a coach, player, parent, administrator, supporter, we all have a role to play in creating positive match day environments. Your attitude and behaviour has a direct impact on an umpire’s enjoyment of their role

3. There is an annual umpiring turnover at community level of 20-25%. Recruitment is difficult, but retention is the more significant challenge. The main reason for this turnover and the challenge to recruit is the existence of poor match day environments that are generated by players, coaches, administrators and supporters (including parents). These environments consist of abuse and intimidation towards umpires.

4. Umpiring can often be a very difficult and challenging task and umpires do the job because of their enjoyment and love for the game – when the match day environment is poor their enjoyment deteriorates and this leads to eventual drop-out.

From this weekend, we are encouraging the following:
- COACHES and CAPTAINS shake hands with the umpires AT THE COIN TOSS and at the END OF THE GAME

Just like coaches, team managers, water runners and the myriad of non-playing participants in our game, umpires are vital in ensuring we can play each weekend. AFL Victoria thanks all our umpires and the umpiring who support the Youth Girls competitions.