Round One A Roaring Success 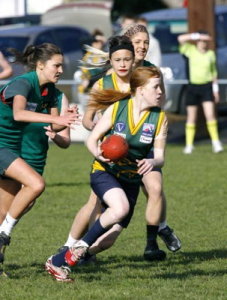 In the Eastern competition, Kew Rovers and Seville Ranges played off in the battle of the new teams, whilst the Northern competition saw a second Diamond Creek team (u15s) and a new team from Keon Park take to the field. Over in the west, Old Westbourne played their first ever Youth Girls games.

Whilst 2009 premiers in four competitions all notched up wins in their first games of the season, formidable performances by Melton and St Albans (Western); St Simon's (Eastern); South Barwon and Clonard (Geelong); and Darebin and Lalor Stars (Northern) means that we are in for a highly competitive season of Youth Girls football.

The Dandenong DJFL Youth Girls competition begins this weekend, whilst Bendigo will be up and running on Sunday May 2.

All Youth Girls results can be found here: