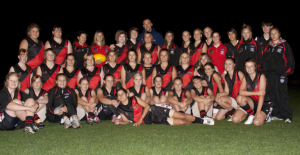 The focus of Jamie's session was on defensive skills and positioning to minimise a forward's space in a game. He showed the girls were to be depending on where the ball was being delivered from and spoke about how to read your opposition. The girls also practiced the fine art of spoiling and spent the majority of the evening doing a lot of contested work.

The umpires' guest presenter was Academy Umpire Ambassador and AFL Goal Umpire Chelsea Roffey. This was the first opportunity the Academy umpires had to meet with Chelse this year. She spoke with them about goal setting and working through the umpiring ranks.

Earlier in the evening, the whole squad focussed on leadership and how they can demonstrate leadership. Over fifty leadership characteristics were identified, with the girls identifying those which they feel are important to them when being a leader.