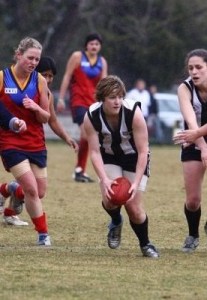 The Knights – St. Simons Junior Football Club, Rowville is pleased to announce the appointment of Emily Nadj to the role of Youth Girls Coach for 2010.

Emily holds her level one coaching certificate, and brings a vast number of skills and experiences to the club. She has played Australian Rules Football since the age of 7. When she reached the age of 12 and unable to continue her love of the game as there was no Youth Girls competition at that time, she moved to soccer. At the age of 16 she moved back to Australian Rules in the Victorian Women's Football League and has since won 3 consecutive grand finals; the latter two with the Scoresby Women’s Football Club. Emily is also a Victorian representative for both Soccer and Cricket – all of this and she is still only 22 years of age.

The Knight looks forward to working with Emily and the initiatives she will bring to our Youth Girls team.

Please come and meet Emily at Stud Park Reserve, Rowville (behind Stud Park Shopping Centre) at 6.30pm on Tuesday 9th March for a meet and greet followed by our first training session for the year (no football boots – due to surface condition) bring a drink and your rego forms, copy of birth certificate or passport together with a deposit if you have not already.

All new players are very welcome