Want To Take Your Football To Another Level? Find Out How In 2010... 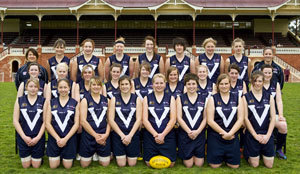 The 2010 Youth Girls calendar is packed with opportunities to play representative football. Trying out for a representative team is a great way to develop your own game and to make new friends.

With more girls playing football than ever before not just in Victoria, but all across Australia, existing representative competitions have been altered to accommodate everyone.

The two match Interstate Challenge series that has been played out between Queensland and Victoria since 2007 will now include Western Australia and a combined ACT/NSW team. The new format will be the first Youth Girls Under 18 National Championships and will be staged in Melbourne in September.