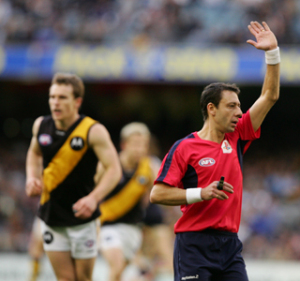 Ellis, a veteran of 244 games that included eight finals games and the 2001 AFL Grand Final, brings to the Academy enormous experience.

A highly respected field umpire who is renowned for his decision making and management of player relations, Ellis will provide elite coaching to twenty of Victoria’s most promising female field umpires in monthly sessions at Windy Hill, where the Academy is based.

The ultimate goal of Ellis’ role is to see a female umpire appointed to the VFL panel, something that has never been achieved.

Ellis was extremely pleased to accept this role,

“This reaffirms my passion to still be involved in umpiring and genuinely appeals to me in respect to my coaching aspirations. I hope that my contribution develops and assists and hopefully furthers the careers of these young talented female umpires”.

Based at the Essendon Football Club and run in partnership with the Bill Hutchison Foundation, AFL Victoria’s award winning Youth Girls Academy provides on and off field development for Victoria’s most promising female field umpires and under 18 female players.

In 2010, the Academy will comprise 50 players and 20 umpires from across Bendigo, Geelong and metropolitan Melbourne.